Wedding Djs over the last 40 years

In the last 40 years life as a wedding DJ has changed dramatically. When I started to do mobile discos in Aberfeldy back in 1976 I used vinyl on two Pioneer PL 512 belt drive decks and my trusty Pioneer SA9800 amplifier into a pair of Wharfedale E70 speakers. 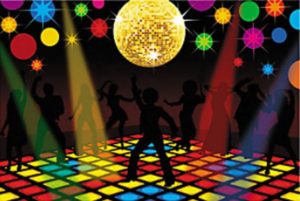 At the time this was really good quality equipment and I loved good sound quality!

My disco lighting was very basic in those days as there was not much disco lighting being made by big manufacturers. I had some coloured light bulbs on a board that were controlled by a pulsar 4000 lighting controller and latterly a ZERO 88 FX4.

After a while I bought some pins pots that gave a nice well defined beam and a mirror ball and this gave a great effect.

At my big charity gig in The Salutation Hotel in Perth I used around 40 of these pinspots and my new Tannoy Lynx and Leopard speakers. They sounded awesome!

I stuck with vinyl for many years and learnt all the tricks on how to stop the needle jumping etc. One of the most extreme things I did was to suspend a table from the rafters in a barn outside Aberfeldy as the floor was so springy! This method was used again several years later on Boogie on the boat with Radio Forth.

Tom Wilson was playing vinyl and it was a really rough crossing on the way back from Amsterdam to Newcastle and Tom was playing vinyl. I suspended the decks from the trussing that we had erected and that solved the problem.

There are lots of things that experience brings you and it’s often how to solve problems. Being a mobile Dj is often about solving problems. Issues with access, electrical issues, even car mechanics.

I remember once having to tie my alternator in my van with a ratchet strap as a bolt had sheared and to put tension back on the fan belt I had to ratchet the connector to the leaf spring on the other side of the van. It got me to my gig and luckily I knew a mechanic in Tyndrum who fixed my van the following morning.

In 1993 I switched to CD players, I was always very anti CD but once I made the switch my 17 boxes of records became 2 boxes of CD’s.

This was a huge benefit and CD’s didn’t jump in my new Pioneer CDJ 500 players, or so I thought, until my first night at Room At The Top in Bathgate. On particularly bouncy songs I ended up carrying the CD players in my hands. The next week a frame was made that attached to the wall and the end was tied up to a beam in the roof! That previous experience in the barn cane back to the rescue again!

Converting all my vinyl to CD was a time consuming process and I started to buy entire CD collections from Mastermix and CD pool and DMC to speed up the process.

I eventually moved to a laptop which made finding tracks very easy but it changed the way I was to Dj. In Vinyl and CD days you’d put the albums or singles that went well together back in your Schweppes crate in the same place. To find an album on vinyl you would run your thumb over the top of the records and you’d know each single by the top inch of its cover! You needed to have a good memory.

My first laptop was a Sony Vaio running OTS Dj software but I hated windows as it was so unreliable with constant blue screens and updates that either didn’t work or caused problems.

I moved to an Apple MacBook in around 2003 I think and I’ve never looked back.

The portability and reliability of a laptop is very good these days and the latest solid state hard drives have made hard drives far faster and much more reliable as they have no moving parts.

i have bought three solid state hard drives so far, one is a copy of the other just in case one fails.

The biggest advances for mobile and wedding Djs though has been with lighting.

Lasers became air cooled instead of water cooled and became significantly smaller. Effect lighting became far more impressive and recently everything has become LED rather than traditional filament light bulbs which you routinely had to change before every gig.

All these advances made lighting far more effective and this allowed me to create fantastic light shows like in this picture!

To book Platinum Discos for your wedding or party please fill in our contact form.