Dedication to my job as a mobile disco wedding Dj is something that I’m well known for.

This wedding really takes the prize as my own personal triumph over adverse weather.

My wedding reception is in Elgin in the far north west of Scotland and I came from Dumfries in south west Scotland yesterday to be here today.

I have arrived over five hours early as the chaos on the roads in the central belt around Glasgow and Edinburgh really had me worried.

I decided earlier on in the week after seeing all the weather warnings to put on snow tyres and off I went to Kwik Fit in Dunfermline and bought four Michelin Cross Climate Tyres.

I am delighted with them. I’ve driven through snow over a foot deep in places and not slid once. A mobile disco wedding Dj must always make it to his gig.

I think that comes under dedication to your job.

So I set off yesterday with a van full of disco gear and headed up the M74. After hearing on the radio that there was gridlock at junction two on the M74 near Glasgow, I cut off down the A702 through Biggar and into Edinburgh that way.

I passed several venues on that road that I have been a wedding Dj in and got to within about 10 miles of Edinburgh.

At that point the road conditions got significantly worse and my new tyres proved their worth. While most other cars were sliding around I was driving as if I was on tarmac and not snow.

I had a very lucky escape just as the road goes down a steep hill before Flotterstone Inn, the road was like glass and I went down very slowly with a lorry a few hundred yards ahead of me.

The lorry in front stopped as there was a lorry coming up the way who was losing traction and I think the driver was worried he would slide into it and block the road.

I stopped behind the lorry and I had realised how slippery that hill was so I checked my mirrors. To my horror there was a car flying down the road sideways, all over the place heading for me.

The only option open to me was to take the right hand turn into Penicuik and the car crashed just where I had been seconds earlier!

I heaved a sigh of relief and headed into Penicuik. That side road was treacherous and had deep snow and all the cars were sliding around except me and an Audi 4WD.

I passed Penicuik Golf Club where I had done several mobile discos earlier in the year and headed for the city bypass. I filled up with cheap fuel courtesy of Sainsbury’s and head for Sighthill in Edinburgh to meet one of my Djs.

After leaving Sighthill I headed towards South Queensferry and passed by one of my favourite wedding venues, Dundas Castle. Then it was over the new Queensferry Crossing which was covered in snow and up past Rosyth, Kinross and then eventually into Perth.

I got into Perth at 8.30pm after leaving Dumfries at 11am. A seriously tiring drive.

As a mobile wedding Dj you can’t be late or not turn up. There’s no excuse for not turning up or being late. A Mobile Dj should always set off in plenty of time just in case. I’d rather be several hours early than late.

I was thinking to myself how dedicated I was to my job as a Dj. If I had not managed to get through to Elgin, where would they have got a Dj for their wedding at short notice?

In my life as a Dj over the last 42 years I can only think of one more challenging a journey than this one. I was coming back from a mobile disco that I had been the Dj at in Kinloch Rannoch. At that time it was then the Barratt Timeshare resort.

Myself and L J my roadie actually dug our way through a closed road for several hours until we got to the main road from Tummel Bridge to Aberfeldy.

It was the most challenging journey I’ve ever done in Scotland as a wedding Dj.

Several other Djs suggested that I just cancel the disco and not to try to go to Elgin. I said I would have to try as the thought of not getting through and not being able to be their wedding Dj was a thought I didn’t even want to contemplate.

I have to say I did quite enjoy the challenge of getting here. I’m now sitting in a beautiful lounge at The Mansion House in Elgin relaxing while the bride and groom get married. 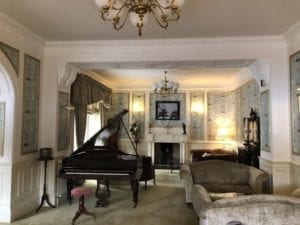 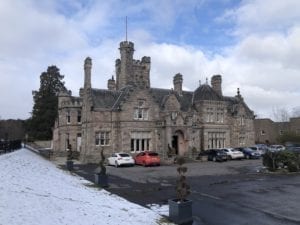 The Mansion House in Elgin. Its the first time I’ve been to this venue. It’s quite well hidden if you’re travelling along the main road through Elgin which I do quite a lot coming back from Fraserburgh, Buckie or any of the other coastal towns.

I’m very glad to finally be here and to have beaten the terrible road conditions. I think that definitely qualifies me for dedication to my job as a wedding Dj.

If you would like to hire a very dedicated mobile disco wedding Dj for your wedding or party please fill in the contact form.